With the 2010 Constitutional Amendment, the structure, duties, and authorities of the Constitutional Court have been rearranged. The three main changes have been the composition of the Court, the tenure of justices, and the scope of the applications to the Court.

Table 1: The Change in the Composition of the Constitutional Court

Table 1 summarizes the composition of the Court as it is prescribed in 1982 Constitution before and after the 2010 Amendment. The Amendment decreased the portion of members who are elected from among the higher courts (military courts, most importantly), while increased the portion of members elected from among other legal experts (teaching staff in higher education, for example). The new design allowed the Court to be more open to civilian (i.e. non-judicial body) influence, and this fact attracted substantial support from independent liberal democrats, and major European institutions such as the European Union, Venice Commission, and Council of Europe. However, with the AKP holding the majority of the parliament and the president being a former party member, the civilian influence had to be subject to one and only filter.

Figure 1: Change in the Median and Mean Justices’ Ideological Positioning 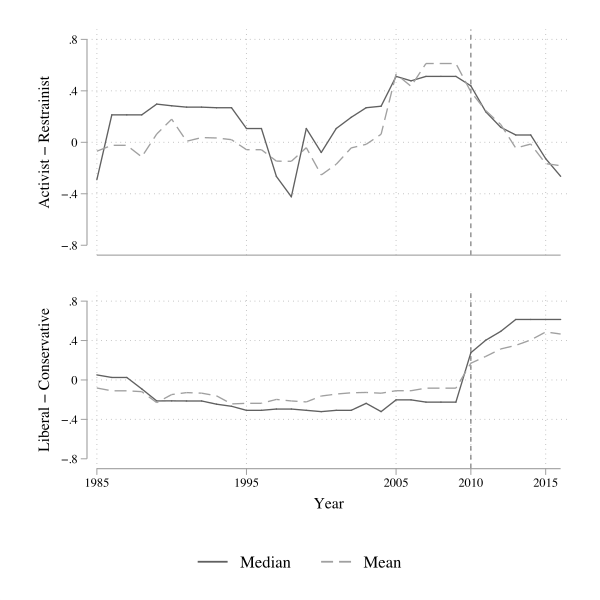 Previous literature considers the political space in Turkey to be two-dimensional. Liberal-conservative dimension stands for justices’ tendency to favor conservative governments’ legislation. The second dimension captures individual justices’ tendency to favor state ideology, or military-bureaucratic elites’ interest. Figure 1 illustrates the annual change in the median and mean justices’ ideological positioning from 1985 to 2016. Since the ideology scores are static, these changes are a result of incoming personnel, not a result of justices varying positions.